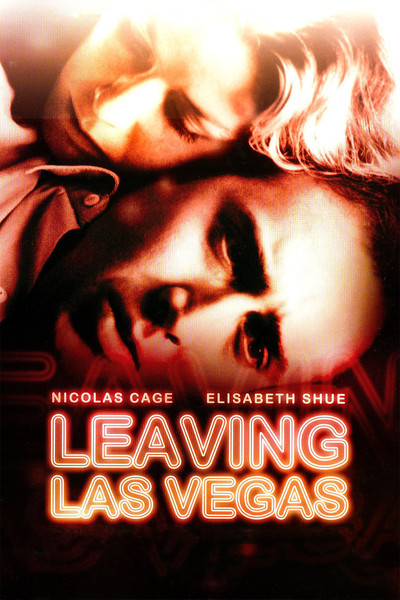 Leaving Las Vegas is a powerful, yet tasteful portrayal of alcoholism and love. Nicholas Cage plays a businessman who, through the overuse of alcohol, loses his family and his job. As a self-confessing drunk, he becomes brash and obnoxious. With no friends he heads off to hurl himself into the grandest human-made pit in the world—Las Vegas.

Amide the splendour of bright lights and a soundtrack of music including Sting and including My One and Only Love, we travel with Ben as he discovers a world where he can let go and fall into the pit of gambling, prostitution, drugs and, of course, alcohol. He takes a room in a seedy hotel and wanders his way into a stupor.

Elizabeth Shue plays a prostitute who befriends Ben and she eventually takes him in. Sera and Ben have an unexplainable bond and an unlikely non-sexual relationship. She is beautiful, yet showing wear from her life in prostitution; he is middle-aged with thinning wiry hair and gaining a growing gaunt look from not caring for himself and too much alcohol. Drawn closer by love, Sera spends her nights working the streets while Ben travels down his road of destruction. During the day they enjoy short bursts of being together.

While Ben is entirely out of control throughout the movie, Sera is also trapped by her life of prostitution. They accept each other, yet seem to long for each to find their own way out. Ben had instructed Sera, “You can never, ever, ask me to stop drinking.” She replies in agreement “I know.” Yet later she says, “I want you to see a doctor.” “No, no doctor,” replies Ben.

It is difficult to identify what takes a person down particular destructive roads. Ben can’t understand why Sera can care for him and calls her his angel. Someone tells him that drinking is a way of killing himself, to which he with a smile replies to the man, “Killing myself is a way of drinking.”

I found the movie to be tasteful in showing the deep extensive darkness of a world where most of our society thankfully never venture. In a scene, where Sera is tragically beaten and raped by some young college men out for a thrill in Vegas, we see only enough to understand the painfulness of such an experience. Yet it is not enough pain for Sera to get away from her slavery to that world.

In depicting alcoholism, there are no stops. Cage plays the battle with stark and shocking realism. I awoke in the morning realizing that, as we came to believe and understand, ‘there but for the grace of God go I.’

We all live trapped lives to some extent and the deeper pits are always waiting just around the corner for us to fall into. It happens to so many in our society and world. On the merry-go-round and downward spiral, it is difficult to get off. We may reach the point where we think, ‘Stop the world, I want to get off.’

Speaking of pits, my favourite jazz musician is cornet player Bix Beiderbecke who lived in the 1920s amide the early days of jazz and bathtub gin. His life was one of spiralling into the pit of alcoholism from which he never returned. His music is always clear, inspired, full of energy and life. It stands in striking contrast to his life, never hinting to the true pain he lived with.

Yesterday, I played my cornet in church with the choir. I had never done this before and never played that type of music. It was a challenge and exhausting both physically, mentally and musically. It was exhausting musically because of the key signatures and the variety of sheet music, or lack of for some songs, ranging from choral arrangements to lyrics and chords, from the seventeenth century to the present.

I think it was physically and mentally challenging because I have not really played much since I was young as a kid. I was a record collector of vintage jazz and swing from the 20s, 30s and 40s. I spent a lot of my time buying records and hanging around jazz.

While living in the US going to college, I met many musicians; some in the pits of human existence. I once took in a fellow who I found in a jazz joint; he had been kicked out of his house and with no place to go. As a child prodigy trumpet player, he had ended up playing in Las Vegas. Because of dentures, he had switched to flugelhorn. As a regular sitting-in with the band he then became a bartender there. When I would walk in, a drink would immediately land in my hand. Sadly he died before his time.

I bought my cornet from a fellow whom I was listening to regularly. He was leaving town for a new opportunity and sold it to me for $100, including a new hard case. It was the top professional cornet from the manufacturer. Thankfully he is still alive and playing today. He informed me that the other owners I also knew well. Two of them have passed before their time.

The history of human existence is littered with the stories of those who fell into a pit and were unable to crawl out. They struggle, become numb, lose traction in life and succumb. They become lost; there is only one way out for them. I fell into that pit. Over thirty years ago, I was lifted out. I know with all surety that the pit is just one step away. The movie Leaving Las Vegas is a realistic and shocking reminder.

After writing this, I did some reading about the movie. Some remarks from reviewers indicated the movie had far more explicit content than what I had seen on TV. Perhaps I was so taken by Cage’s incredible performance that I simply missed it. However, my wife would have insisted it be turned off. One remark stated that the DVD version had scenes not in the theatre cut of the film. Someone confirmed this by obtaining a copy from the library.

The movie was very compelling to me and when I discovered that there is some very explicit content absent from the version I saw, I was somewhat creeped-out and felt cheated and betrayed. I had said here that the movie was tasteful, yet it seems to have an explicit twin that is so much more like the trashy sex obsessed material that Hollywood puts out minus the happy ending. I had thought that Hollywood had finally been able to deal with some very disturbing subject matter, take it to the edge and yet not cross the line into having to show the filth.

The movie was disturbing enough in the way it portrayed alcoholism and the death wish driven addiction that goes to the heart of humanity. I want to point out and state to Hollywood that a movie can be amazingly compelling without going over the edge. I feel it is a far greater accomplishment to get the message across, be entirely artful, without crossing the line. Please Hollywood, think about this. The human mind is powerful and can get the message without being bombed.