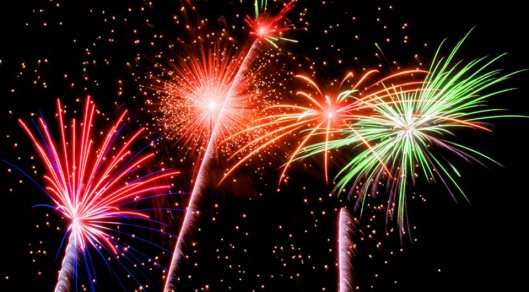 It was Halloween last night and we were once again having to endure the sounds of a war zone late into the night. It is hard to believe that people have so much money to spend on such a vast display of celebrating evil. These are no small puffs of firecrackers such as I had when I was a kid, but bursting bombs that shake the ground and then light up the sky like stars just above the rooftops. I can’t imagine the cost of that momentary delight. Like so much in our society and world, nothing has meaning or substance to last longer than a shooting star. What is the worth of the short-lived disposable creations of humans, of thoughts and words that evaporate into the mist of noise on a brightly lit screen?

So I went to bed last night thinking about how the neighbourhood fireworks remind me of The Star Spangled Banner:

Oh, say can you see by the dawn’s early light
What so proudly we hailed at the twilight’s last gleaming?
Whose broad stripes and bright stars thru the perilous fight,
O’er the ramparts we watched were so gallantly streaming?
And the rocket’s red glare, the bombs bursting in air,
Gave proof through the night that our flag was still there.
Oh, say does that star-spangled banner yet wave
O’er the land of the free and the home of the brave?

(Note: This is only the first verse. There are several more.)

I could remember most of it from when I was living in the States as a kid. The parts that really stuck-out in my mind where the ‘rockets,’ ‘bombs bursting,’ ‘Gave proof… flag was still there’ and ‘…land of the free… home of the brave.’ It is a song of great strength. This is why Americans have fireworks on the Fourth of July. I suppose what fireworks could mean on Halloween is freedom from the evils celebrated on that particular night and throughout the year, along with bravery to endure and stand up against all evil.

We are in a war zone where evil seeks to encompass our lives and to eventually destroy us. We can turn the tables on evil by altering the meanings of that which seeks to creep into every aspect of our lives, spreading and celebrating evil. A good example is to consider the fireworks as a celebration of freedom and bravery over evil, just as the Americans do on the Fourth of July.